Depression makes life a misery for millions of people around the world. Yet, modern science does not fully understand the causes of depression nor how it may be relieved.

According to the Mayo Clinic (http://www.mayoclinic.org/diseases-conditions/depression/basics/causes/con-20032977), “as with many mental disorders, a variety of factors may be involved, such as:

– Biological differences. People with depression appear to have physical changes in their brains. The significance of these changes is still uncertain, but may eventually help pinpoint causes.

– Brain chemistry. Neurotransmitters are naturally occurring brain chemicals that likely play a role in depression. When these chemicals are out of balance, it may be associated with depressive symptoms.

– Hormones. Changes in the body’s balance of hormones may be involved in causing or triggering depression. Hormone changes can result from thyroid problems, menopause or a number of other conditions.

– Inherited traits. Depression is more common in people whose biological (blood) relatives also have this condition. Researchers are trying to find genes that may be involved in causing depression.
– Life events. Traumatic events such as the death or loss of a loved one, financial problems, high  stress, or childhood trauma can trigger depression in some people.”

While there are different views as to the causes and mechanisms that govern Depression, many researchers believe that an imbalance in levels of the neurotransmitter, serotonin, can affect a person’s mood and lead to depression – serotonin is often called “the happiness hormone” even though it is, in fact, a neurotransmitter.

Serotonin levels may be implicated in a number of ways –

– the brain-cells produce low levels of serotonin
– there is a lack of receptor sites able to receive serotonin,
– serotonin cannot reach its receptor sites, or
– tryptophan, the raw material from which serotonin is made, is in short supply.

If any of these biochemical factors are in play, researchers believe that it can lead to depression and other mental or emotional issues like anxiety, panic, excessive anger, etc.. Where depression dominates, the brain no longer functions normally and one effect of this can be reduced production of the “happiness hormone” serotonin with a resulting increase in unhappiness.

Some anti-depressant medications seek to alleviate the symptoms of depression by artificially regulating serotonin levels. While they can affect the symptoms, they can also cause side-effects. 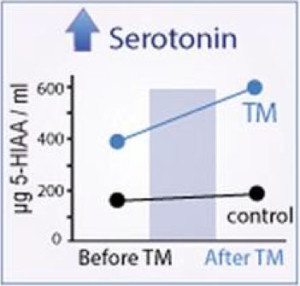 The experience of Transcending, however, activates the body’s own healing power, and the brain’s normal functioning is gradually restored again. One result indicated by research is an increase in serotonin production, at first during TM practice and, eventually, throughout the day.Ref.BUJATTI, M., and RIEDERER, P. in Transcendental Meditation technique. Journal of Neural Transmission 39: 257–267,1976 With the continued practice of Transcendental Meditation, many report a noticeable improvement in depressive symptoms.

Research has now shown that the experience of transcending is powerful enough to affect even genetic conditions of clinical depression.

Antidepressants have side-effects. Transcending has side-benefits.

When you we switch on the light, darkness disappears. Everyone holds an eternal source of happiness within – see transcending = the highest human experience.

Increase of serotonin is just one more objective indicator of how we’re contacting this inner source of happiness. Yet, as this website indicates, a considerable number of other areas can experience improvements – Health, Brain Development, Self-Confidence, Relationships, Success, etc.. We feel better about ourselves. Feeling better about ourselves lays the foundation for an improvement in life in general.

As the relationship between depression and the levels of communication and coherence within the brain come to be more clearly understood, the unique levels of brainwave coherence recorded during TM practice may be found to have profound implications for the treatment of depression. This is certainly an area worthy of further investigation.

The effect of TM on Depression: Scientific Research

Over 20 studies have examined the effect of TM practice on Depression and three of these are looked at in more detail below – for further studies click on the “Research” tab.

The National Institutes of Health (NIH) of the US Government is one of the largest and most prestigious health research institutes in the world. It is well-known for its high demands on the quality of scientific research. In recent years, the NIH has supported 2 studies that looked at the effect of Transcendental Meditation on depression, as part of a larger study on the effect on heart disease.

48% reduction of clinical depression after 3 months of TM 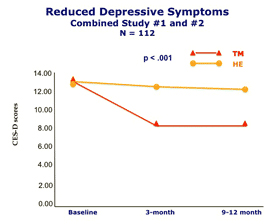 Both studies, carried out by the Charles Drew University in Los Angeles and the University of Hawaii in Kohala, showed a significant improvement for the group learning the TM technique as compared to the control group. The improvement was most significant for those suffering from the most severe form of depression.

A study carried out by the University of Colorado Medical Center, in Denver, USA, compared the effects of Transcendental Meditation to the best forms of psychotherapy on patients receiving treatment for traumatic stress. Several problem areas were studied, including Depression. 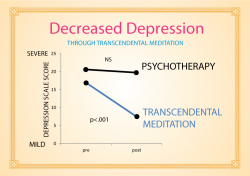 After 3 months, the TM group showed significant improvements in all of the areas studied –

However, the psychotherapy group showed no significant improvement in any area. If the Transcendental Meditation technique can be used for patients with severe symptoms of traumatic stress (these patients were war veterans), then, perhaps, it is safe to assume that it is effective to treat anyone whose symptoms are not so severe or deep rooted.Ref. Journal of Counseling and Development 64: 212–215

Like psychotherapy, stress management tends to work on the surface, but the tensions that often may cause depression can reside much deeper. Therefore, stress management, as opposed to the experience of transcending, may only have a limited effect on Depression.

To test this, a study was carried out in collaboration with the West Oakland health center (California, USA) and the American government. The study took place in a high-security institute of the US Government, well-known for the high stress that it generates for its employees. Employees were divided into 2 groups, a group that learned the TM technique, and a group that participated in a stress-management programme.

Both groups had the same expectations and received an equal number of hours training through their TM teacher or stress-management coach. The researchers measuring the results did not know who belonged to which group. 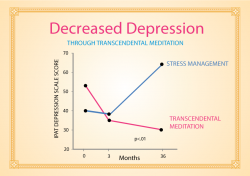 Although the TM group by chance (due to random assignment) showed a higher level of depression at the start of the experiment, a dramatic improvement occurred within 3 months, unlike the stress management group, that showed no significant improvement. After further measurement, 3 years later, the difference really showed. The stress- management group significantly deteriorated (higher depression scores) while the TM group, despite its exposure to copious amounts of stress at work, continued to improve. (p<.01).

These long-term results may be an underestimation of the effects of TM because, as part of the experiment, no further follow-up was offered after 3 months – neither by the stress coach nor by the TM teacher. Part of the strategy was to see how employees would perform if they had to manage independently. In reality, TM Centres today do offer this follow-up and experience shows that results are even better with regular follow-up.

For further research click on the “Research” tab at the top of this page.

While some of those suffering from Depression may experience rapid and significant improvement, for many, the effects will be gradual. The benefits of TM accumulate with regular practice. For those on medication, it is important to give the brain physiology time to normalise. Those on prescribed medication for Depression should continue with their medication and their meditation. Where they notice a reduction in or absence of symptoms, they may consult with their doctor about the possibility of tapering off. Don’t come off your medication without consulting your doctor.